The Old Victorians’ Association was established in 1941 as a formal channel for ex-students to continue to associate with our alma mater after we have left the school or the college.  These include Victoria Afternoon School, Victoria Bridge School, Victoria Pre-University, Victoria School and Victoria Junior College.

The OVA is one of the few old students’ institutions with such a long history and rich tradition. Throughout their lives, the sheer sense of belonging and identification with the Victorian family continues to bind all Victorians together.

Constitutionally, our objectives are:

Through the OVA, Victorians keep in close touch with the achievements and well-being of the academic institutions, as well as renew ties with our mentors and fellow Victorians.

The OVA gives support to the activities undertaken by the academic institutions, assists needy and deserving Victorians, and promotes sports, social and cultural activities amongst members.

The office of the OVA is situated in Victoria School, a courtesy extended by the school to the association in 2003 when the former moved into its current Siglap premises.  Activities organised by the association are usually held in either VS or VJC, with some other events held externally.

The association has been honoured with the return of old boys and girls such as His Excellency S. R. Nathan, former President of the Republic of Singapore and its longest-serving one.  President Nathan is a Honorary Life Member (since 2006).

Mr S Dhanabalan, Chairman of Temasek Holdings and other organisations, is our latest Honorary Life Member (since 2009).

President Yusof bin Ishak, the first President of the Republic of Singapore, is featured on the Portrait Series of the currency notes of Singapore.  The $2 note (front of note, back of note) is designed with the theme of education and features aspects of President Yusof’s life, including Victoria School when it was sited at Tyrwhitt Road.

Lists of other prominent Victorians can be found here and here.

The crest of the association is adapted from the crests of the academic institutions which are in turn similar to Oxford University’s crest, possibly due to the school’s English origins.

The open book symbolises lifelong learning, while the torch symbolises truth and the passing on of tradition. It also illuminates the way of Victorians who venture forth to excel beyond the shores of Singapore.

The association’s motto is shared with the academic institutions.  It was created in March, 1940 and is in Latin, meaning “Nothing without Labour”.  It emphasises the need for Victorians to work hard in fulfilling their dreams and passions and serves as a rallying lifetime motto for many Victorians.

For others came before and went
And carried to the world
Victoria’s fame and our intent to
Keep her flag unfurled.

Poem composed for the OVA 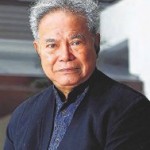 Nil sine labore.
We felt but did not grasp
That truth, until the years.
The changing age confirmed severely:
Nothing without labour,
Nothing is for free.

You grew us well,
Mother of our youth,
Gave grave to toughness,
Tuned mind and feeling.
Our teachers scolded out of love.
We loved them with the fevour
That only mischief has.

We learnt quarrelled laughed,
Little enemies, great friends
In classroom lab assembly
Below the arches of the Hall.
Upon the tower built by Amin
Bock Hai and their scouting gang.

We shared ourselves, so
Found ourselves: Henry Aziz Boey
Soon Khiang Beng Keng Peter Poh
Guan Noordin Eric Heng Goe
Dhanabalan Teo Yong Chua Seng,
Among the intricacies of calculus,
Adverbial phrase, The Rover,
There was the steadying of the eye
As a though struck deep with beauty,
Or growing symmetry, sudden revelation
We did not feel the day go by

The faces appear each year
Along the corridors to labour, love,
Learn, They too will know
That here our better youth was spent,
That what we are was seeded then.

We do not return to you, mother,
Because we never really left.