The Alliance and the Programme

The Victoria-Cedar Alliance (VCA) puts in place the Victoria-Cedar Alliance Integrated Programme, a 6 year course which encourages students to respect ideas, pursue excellence and celebrate discovery. The students on the programme are directed to take ownership of their educational development and are strongly encouraged to seek and create opportunities for themselves in learning, so that they may develop a passion for knowledge and equip themselves with the necessary skills and intellectual capacity of a lifelong learner.

The programme brings together the three established schools with a shared vision and mission to develop upright citizens and leaders with character and integrity. All three schools hold strongly the value of learning with passion and purpose to contribute to family, community and nation.

Of the three schools, Victoria School (VS), is the oldest, established, as a school for boys since 1876. Cedar Girls School (CGS), a school for girls, came into being in 1957. Victoria Junior College (VJC) was formed in 1984 when the Ministry of Education (MOE) decided to detach from VS the Pre-U classes for both sexes, in line with its programme for junior colleges. Both VS and VJC continue to share a common school motto and anthem. The Victoria Advisory Committee (VAC), formed in 1968, serves the two schools. The Old Victorian Association (OVA), formed in 1941, is also made up of alumni from VS and VJC. Both CGS and VS have long shared a strong interest and passion for sports, and in character building and leadership beyond the classroom. A good number of CGS alumnae are also enrolled in VJC, after their O Levels.

The Genesis of the Victoria-Cedar Alliance (VCA)

Since its formation out of VS in 1984, VJC has made good progress as an outstanding institution, both in preparing its students for the A Levels and in the co-curricular field. With an increasingly better intake of students over the years, it felt the need to introduce the Integrated Programme (IP), in keeping with the more established junior colleges, to cater to the needs of the more capable students.

In 2005, VJC began to offer a 4-year IP, known as the Victoria Integrated Programme (VIP), taking in students at the Sec 3 level from different secondary schools. Both the Principal of VJC and VS corroborated with an intention for VS to provide an avenue for its more capable students to join the VIP at VJC. Both felt then that VS should go co-educational for the purpose, and a proposal was submitted to MOE. The students at VS and the alumni reacted to the intention to change the establishment. Understandably, the proposal was rejected.

In 2007, the VAC sought the support of the Victorian family through OVA for the same proposal to be put up again to MOE. Several dialogues with the alumni were held that year and the next. Victorians felt strongly that it would go against the tradition and character of VS to go co-educational. They also rejected VJC’s intention to extend its VIP to 6 years to take in the better VS students who would qualify, as this would inevitably hurt VS at its very core.
With the impasse, the leadership of VJC decided to go its own way, despite the disagreement of Victorians. The school, with the concurrence of the VAC, submitted its proposal to MOE in 2009. Understandably, the proposal was again rejected by MOE.

A group of concerned former VS teachers and alumni then worked with OVA to come up with an alternative proposal. A task force was formed to come up with a more viable solution which would enable VS to remain a school for boys, and to provide for a good intake for the IP at VJC. CGS was identified as a possible partner. The compatible school for girls agreed to the formation of the VCA with provisions for intake of non-IP students from both schools who qualify for admission to VJC. A re-submission of the proposal was made in the same year.

In 2010, MOE announced the VCA and VIP officially.

Development of the VCA

The VCA enables IP students from both VS and CGS to remain in their own schools for the programme from Year 1 to Year 4, and to move on to Year 5 and 6 at VJC. Non-IP students at both schools, who are enrolled at Sec 1 progressed to Sec 4 to take their O Levels Exam. Subsequently, those who apply and qualify for VJC will take the A Levels Exam, together with the IP-students.

The first batches of VCAIP students at VS and CGS are currently in Year 3. They are on course to move on to VJC in 2016.

OVA has in no small way contributed to the success of the VCA and the VIP through its support and funding of programmes, activities and awards to motivate the students. It will continue to facilitate the efforts of alumni to contribute to strengthen the Victoria schools, and to work with the alumni association of CGS to develop the VCA. 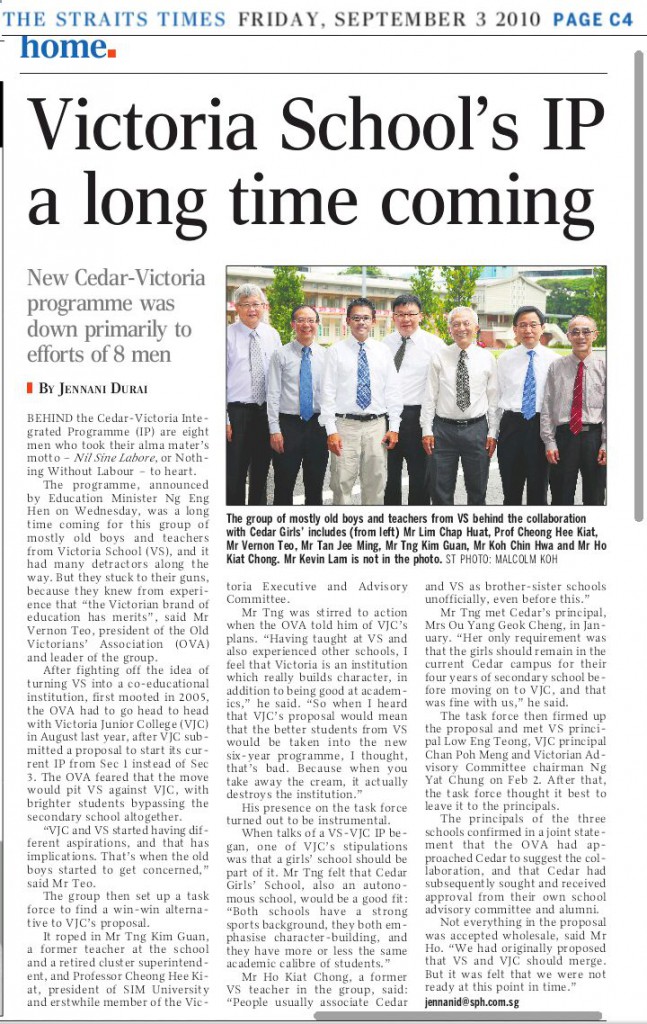