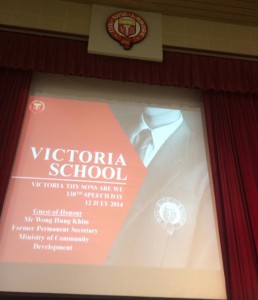 It is a great honour & privilege for me to be here this morning as the Guest-of-Honour of Victoria School 138th Anniversary & Speech Day. The timing of this Speech Day is also quite uncanny, coming as it does, on the eve of my 76th birthday. Thank you Mr. Lim Boon Kong, Principal VS for the kind invitation.

The theme for this Speech Day is “Victoria thy sons are we” and in line with this, Mr. Lim has requested that I share with you, the students, some of my personal experience and stories. Hopefully you will be inspired to do well in life and continue the fine tradition of succeeding generations of Victorians in giving  back to their Alma Mater.

It was in 1954, exactly 60 years ago, that I entered VS as a student in Form II, the equivalent of Sec 1 today.  I stayed for   six years, leaving the school in 1959 after my Higher School Certificate (HSC).

It was a totally different time and era then.  Singapore was still a British colony, very much undeveloped, just like many of the 3rd world countries we know today.  It had a population of just about 1.15 mil and English was spoken mainly by the elite, the privileged upper class while the majority of the people spoke only dialects, or their mother tongue such as Malay or Tamil. Even among the Chinese, Mandarin was seldom used.

Victoria School was then located in Tyrwhitt Road.  I recall that at my first two Speech Days, many of my classmates and I sat in the school hall and listened in awe of the Guest-of-Honour, without comprehending much of what they said.  It was only in later years that we were able to  make some sense of the speeches. Such was our level of English then.

Now fast forward 60 years.  We are now a developed nation with a population of about 5.5 mil and English is the most commonly used language here.  Hence, I have no doubts that you’ll be able to understand and grasp what I’m going to say.

As mentioned earlier, much has changed in 60 years.  For example, I had gone through many different national anthems in keeping with the changing geo-political landscape, not just in Singapore, but also in the UK, China and Malaysia, culminating in our present anthem “Majulah Singapura”.

We now live in a digital, high-tech, instant communication and a globalised world.  Many of the old things have disappeared or become obsolete.  New skills and knowledge need to be learned and acquired to meet new challenges and demands.  While pursuing all these to stay relevant, I would like to remind you that it is equally, if not more important, to develop your character and spirit such as integrity, honesty, a sense of curiosity and an ability to think out of the box in order to challenge the new frontier.  Also, in addition to pursuing academic excellence, you should take a wider interest in life.  Active participation in co-curricular activities (CCA) is therefore highly recommended.

From my personal experience in VS, I found that there are positive spin-offs through such participation.  I recall playing the oboe, violin, recorder and harmonica as part of the programmes for our annual speech days.  I also played table tennis and chess for the School.  The social or inter-personal skills, organizing ability and leadership qualities so acquired helped tremendously in my later working life.  They enabled me to clinch many business deals while I was heading the Port of Singapore Authority (PSA), Singapore Telecom (Singtel), Jurong Town Corporation (JTC) and Delgro Corporation. It is a fact of life that when all things are equal, your ability to relate to your counterparts and business associates will help to tip the scale in your favour.

This brings me back to the time when I was Chairman of the Victoria Executive Committee (VEC) and Victoria Advisory Committee (VAC) from August 1979 to Dec 1996, with a few years break in between.  I used to stress the importance for VS and VJC to provide our students with an all-round educational experience, rather than concentrating purely on academic excellence.  I am therefore very happy to note that among its key focused areas, the School will strive to provide our students with “Academic Excellence in Student All-Round Development “.  This balanced approach ensures that our students will have the necessary social skills to go with their intellectual prowess.  They will most probably succeed in life and be in a position to contribute to the nation, community, and our Alma Mater.

In this regard, I would advise that as a first and easy step, you should start by contributing to your Alma Mater when you leave VS or VJC.  The most convenient way of doing this is to join and be active members of the Old Victorians’ Association (OVA).

The OVA has been quite active in recent years under the capable and dynamic leadership of its President, Mr. Tan Jee Ming. It has embarked on a number of activities such as the GPS Fund, the Kampong Spirit Breakfasts and the OVA Golf  Challenge ( Wong Hung Khim Trophy). The aim is to provide  opportunities for its members and students of both VS and VJC to meet and interact.  It also raises funds for awards and prizes to be given at annual speech days of VS.

Personally, I have benefitted a great deal from my six years in Victoria School.  The knowledge and more importantly, the values and other intangible qualities I acquired  are invaluable.  They enabled me to do well in life, not just in my career but also in my personal dealings and relationship with my family, friends and relatives as well as colleagues and business associates.

I am most grateful to all my teachers and principals in VS. In return, I’m fortunate to be able to make some contributions to my Alma Mater.  During my Chairmanship of VEC and VAC, my fellow committee members and I made three key  decisions  which ensured the success of both VS and VJC.

First and the most important move we made was to lobby the Ministry of Education (MOE) to end the 3-year Pre-U courses in VS. As you know, VS has always been one of the top schools in Singapore.  But for some reasons, its standing dropped in the 70’s and it was relegated to be a Pre-U Centre.  This meant that our students had to spend 3 years to complete their Higher School Certificate (HSC) instead of the usual 2 years.  As a consequence, students with good PSLE results avoided VS and even our own students who had done well in their School Certificate or “O” Levels left us to pursue their Pre-U in other schools or junior colleges. This became a vicious cycle and VS’s  standing continued to plunge.

Fortunately, the MOE granted our request to end the 3-year Pre-U courses and set  up a junior college named after Victoria. This led to the recovery of VS as a premier school and the birth of VJC. In this regard, we were also instrumental in the selection of the site for VJC and the appointment of Mrs. Lee Phui Mun as its first Principal.  Thank you, Phui Mun, for your tireless efforts in laying the firm foundation and ensuring the success of VJC.

Our second decision was to relocate VS from Tyrwhitt Road. The building and facilities were old and inadequate to meet our needs.  So we got the approval of MOE to relocate the School to Kallang Bahru.  Later, the School moved to its present location.

And finally, with the establishment of VJC, one of our main concerns was to ensure a close linkage between VS and VJC.  We did this by insisting that the badges of both institutions have many common features so that they look almost identical.  We also insisted that they have the same school song or anthem.  Hence at joint functions, the students would feel that they are from the same family.

I am glad to note that these critical and timely decisions helped both VS and VJC to achieve and retain their positions among the top schools and junior colleges in Singapore.

In closing, I would like to leave you with this advice: Cherish the friendships you built while in school, as these will prove to be true and lasting.  As adults, you will find that your good friends in school will be among your most trusted buddies.  This is very true in my case.  I still meet, socialize and play golf with some of my classmates—60 years after we first met in Victoria!   Thank you.