VS Choir has made history by becoming the first Performing Arts group in Victoria School to perform at the prestigious Esplanade Concert Hall, as part of their biennial concert, Rhapsody. VS Choir wishes that you would take your time to support them in this endeavour.

The theme for this 11th Edition of Rhapsody is “A Musical Mosaic”. This theme brings out the variety in pieces that VS Choir performs – from Asian to Western, from sacred music to English classics. The theme aims to show that even with such contrasting style of music, when placed together, the songs can form a complete and beautiful picture.

Rhapsody XI will also feature guest performances from VJC Choir and our very own alumni choir. We will also have a duet between our very own Tenor soloist and a Cedarian Soprano soloist.

VS Choir strongly hopes for your support. Tickets can be purchased through sistic. Tickets are sold at $15, $20, $25 and $30. Should you have any enquiry regarding ticketing, you may contact VS Choir via email.

All profits from this concert will be used to fund our future programmes and overseas competition trips. VS Choir has been a choir that excels frequently in the international scene. Our most recent achievements were clinching Gold and Category Champions for the 10th Voyage of Songs (Bangkok) in 2013, as well as perfect score of 100 points in Festa Choralis Bratislava in 2012. To maximise the number of students that are able to experience these trips, subsidies are given to provide financial aid. All profits are channelled to these subsidies. 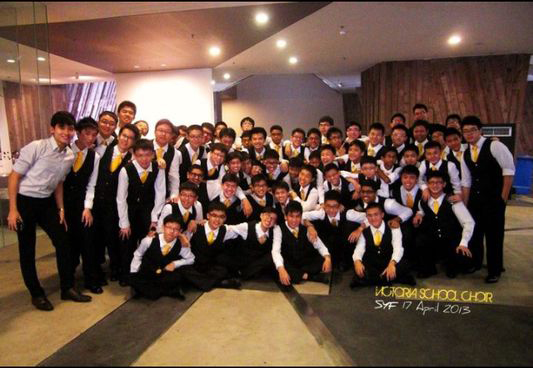 Victoria School Choir was formed in 1991 under the direction of Professor Nelson Kwei, a pre-eminent local choral conductor, and has made significant strides in its development as an all-boys choir. Besides staging the bi-annual Rhapsody concerts, the choir has also participated in international choral competitions.

In 2003, the choir travelled to Genting Highlands in Malaysia for the 21st century International Choral Festival, where they achieved the Gold Diploma Award. Then, in 2008, in the Olomouc Festival of Songs in Czech Republic, the choir attained “Category Champion” and was the Grand Finalist in the competition. More recently, in 2010, the choir once again attained the “Category Champion’’ and Grand Finalist, but in the Orientale Concentus competition held in Yilan, Taiwan. In 2011, Victoria School Choir attained the Distinction award in Jubilate V Festival of Choirs, which was held at Kuala Lumpur, Malaysia. In 2012, the choir took part Festa Choralis Slovakia held in Bratislava, Slovakia. It obtained a perfect score of 100 marks for boys’ choir up to 19 years of age. In the same year, the choir also attained the Distinction award in Jubilate VI held in Desaru, Malaysia.