This article was contributed by Mr Lim Eng Chong. 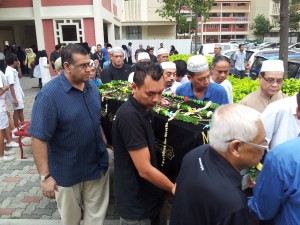 We will miss you

It was with a deep sense of regret that I received the news on the passing of retired VS teacher Mr Jelany on Wednesday, 12 Sep 2012.

Mr Jelany is survived by his beloved wife and two daughters (both of whom now live in London, UK). The funeral service was held at his Singapore home in Pasir Ris on Thursday afternoon, and his former Victorian students and teacher colleagues were present to pay their last respects and bid farewell. Mr Jelany was a Muslim of Egyptian ancestry.

He was a dedicated and well-respected teacher in VS from the late 1960s to early 1980s. He taught English, Geography and was best known as a “Sports Teacher” as he was one of the two teachers whose ‘standard’ attire was white shorts, white collared T-shirts and white shoes, even when teaching in the classroom (the other was Mr Tng Kim Guan who was a highly motivational rugby coach).

Mr Jelany was a strict and passionate teacher who demanded full attention in class and in the field. His towering six-foot-plus height with his stern, frowning look and dark tinted glasses were enough to silence the nosiest students as he walked past them along the corridors. His contribution to VS’ continued reign in the track-and-field arena was tremendous as he was a great athlete and coach with exacting standards and discipline.

Mr Jelany was among some of the most inspiring VS teachers of the era, eg. Mr Mok Khoon Yam, Mr Soocelaraj, Mr Pierre Retnam, Mr Phua Eng Lim, Mr Ho Kiat Chong, Mr Tng Kim Guan, Mr Harry Lim – all passionate teachers with great leadership, charisma and dedication, who instilled in many Victorians the great Victorian Spirit of passion, resilience, perseverance and unfailing loyalty. They taught and motivated with fervour, devotion and love for their students and the school.

For those who had the privilege of knowing, taught or inspired by Mr Jelany, let us spend some moments of reflection in tribute and in remembrance of a great Victorian teacher who demonstrated the true meaning of education by imparting to us the lessons of life beyond the confines of the classroom.

May he rest in peace. Farewell Mr Jelany.

Below are some messages from Victorians who know Mr Jelany:

From Chiang Chie Foo (Permanent Secretary, Ministry of Defence. Chie Foo has served as Perm Sec in the various Ministries including PM’s Office. The current Perm Sec of PMO & Cabinet Secretary, Tan Kee Yong is also a Victorian. Both Chie Foo and Kee Yong continue to support & contribute to Victoria, and had served in the Victoria Advisory Committee (VAC) and Victoria Executive Committee (VEC) for a number of years):

Knew Jelany when I was in VS in Sec 1, way back in 1969. He was new in the school just as us, but as the others have commented, he was a towering figure, with great charisma, and a strong sense of commitment. A great PE teacher and leader and counsellor who has the boys’ interest at heart. All of us who know him will agree with me that part of who we are today are due in no small part to the way our teachers have taught us with their personal commitment, dedication and a walking model for all of us.

We share in the loss, and may Jelany rest in peace.

From Mr Abdulhadi Wahid (Hadi was a bright scholar who is now a senior official with the telecom regulatory authority in Malaysia. He is a passionate & loyal Victorian who, without fail, drove down from KL every week for two months to practise with us for the Alumni Band performance at the 135th Anniversary last year):

Mr Jelany taught me in 1974 when I was in Sec 1.
He was one of the teachers with a sense of humour that I could surely relate to. His remarks were right to the point and yet humourous. I could still remember some of the jokes he made about me and a few of the times he caught me being a prankster 🙂

May God reward him for all his kindness to us all.

From: Abdul Hamid Sultan (aka The Sultan – another passionate Victorian who, despite being a busy lawyer, would step forward to help in anything with a Victorian cause).

I received the sad news from Zan. Unfortunately my client’s hearing was scheduled that morning which finished in the afternoon. Thus I was unable to pay my due respects. I don’t recall him teaching me but I do recall his tall slim stature, chiselled face & square tinted glass.

May God shower His Blessings & place him amongst the Righteous.

Sorry to hear about demise of one of our great teachers.

Before my posting to VS in 1976, I had already known Mr Jelany. We were classmates at the Teachers’ Training College for 3 years from 1962-64. We had been good friends until we parted ways because of our retirement. After retirement we met many times during prayer sessions at the Sultan Mosque where I’m a Management Board member. It is sad to hear of his passing. Indeed he was one of my nicest of friends.

May God bless his soul and may he Rest In Peace.