It is with a great sense of loss that the OVA announce the passing on of Fellow Old Victorian Dr Lau Teng Chuan on 8 May 2012. He was 83 years old. The Victorian Family has lost an extraordinary Son.

As reported in The Straits Times (9 May 2012 Home Section Pg B11), “The Singapore sports fraternity yesterday lost one of its most well-known figures …”.

Teng Chuan was a student in Victoria School in the 1940’s. He excelled in both his studies and sports. Teng Chuan was not just an avid sportsman, his love for sports extended way beyond being only a player to being the “Godfather” of sports promotion and education in Singapore.

He was among the country’s best badminton players in his young days, and trained with team-mate Wong Peng Soon, a world renown legendary player who became a four-time All-England Champion in the 1950s. In the 1960s, Teng Chuan volunteered to serve as national Badminton coach out of passion for the sport and love for the country. He was subsequently asked to take over the helm at the Singapore Sports Council (SSC) in 1975, which he served to the early 1990s.

Teng Chuan was from Victoria’s “Golden Era” – the 1940s to 1950s – a period in Victoria’s history when Victoria School was famous throughout the whole of Malaya (Colonial Singapore + Peninsula Malaysia) for producing the best in sports and education.

Victorian Olympians who represented Singapore in the 1956 Melbourne Olympics, Vijiaratnam (90 years old now), Kesavan Soon and Jeyasureh (both in their 70s), all remember Teng Chuan with fondness and respect.

[Vijiaratnam is the only person who ever represented a country in four sports – Hockey, Football, Rugby and Cricket; Kesavan Soon was the fastest man in the whole of British Malaya and the only school boy who competed in Athletics in the 1956 Olympics; Jeyasureh was in Singapore’s 1956 Olympics Hockey team which trounced USA 7-0; he also represented VS in soccer, cricket and athletics].

Teng Chuan is however best known for his affectionate personality, his spirit of volunteerism, his humility and the “heart” to educate and help others, and of course his giant contribution to Sports and Physical Education in Singapore. Here are some of the tributes to Teng Chuan:

“He was one of those great, gentle people who lived by simple principles: Do good. Be honest, be kind. Act from your heart. Make the world a better place. He lived his values and in doing so, had a profound impact on our lives.” – SSC Chairman Richard Seow

“Singapore has lost someone who spent his life in humble service to our country. He was a teacher, a coach, a mentor and a friend to anyone in need of sound advice and a helping hand ….You can see the influence of his fine mind and the greatness of spirit…” – SSC CEO Lim Teck Yin.

Singapore and Victoria have lost a great Son. As Victorians, let us unite our hearts in remembrance of a great Singapore legend and our beloved Victorian brother. Farewell Teng Chuan. 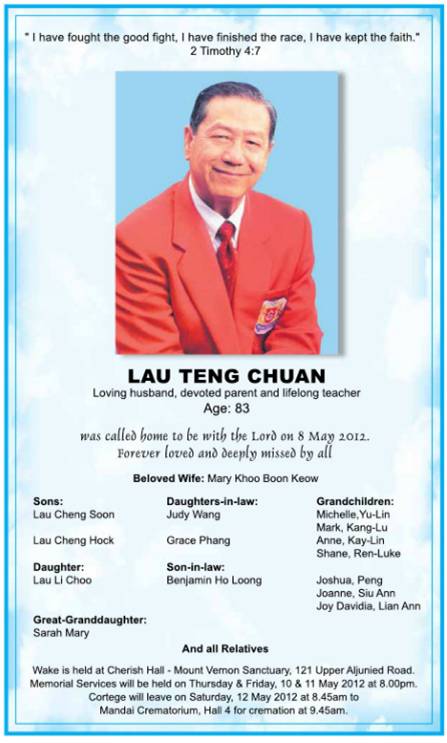