Congratulations to Tyrwhitt A team, captained by Abang Ho Kwang Hock, for being the Champions of the OVA 2011 Soccer League after winning the VS B boys by a score of 5-4.
Both the Tyrwhitt ‘A’ and the VS ‘B’ boys were playing for a win, as in the earlier game at 3pm, between Kallang ‘B’ and Tyrwhitt ‘B’ ended in a draw. Tyrwhitt ‘B’, captained by Abang Benjamin Foo, was on track to keep up the pressure, as they were leading 2-1 at half time but the Kallang ‘B’ team, led by Dexter Chua came back strongly in the second half to drew the game at 3 all, thus dousing the hopes of Tyrwhitt ‘B’.

Tyrwhitt ‘A’, started the game drastically, as they were down by 2 goals within the first 3 minutes from the VS ‘B’ boys lightning quick counter attacks. And, maybe as a reprieve there , Mother Nature took its course and the Game had to be temporarily halted due to lightning with the score at 3-1 in favour of the VS ‘B’boys team.
When the game resumed in the second half, the VS ‘B’ boys, knowing that they had to win by 2 clear goals, went all out, searching for that elusive goal but the Tyrwhittians staved off the wave of attacks and in fact came back strongly to restrict the VS ‘B’ boys to 3-4 scoreline, and with the handicap of 2 goals, won the Game thus ensuring them the Championship. 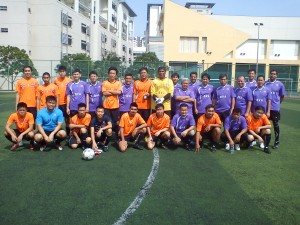 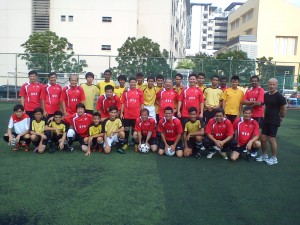 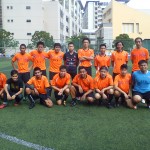 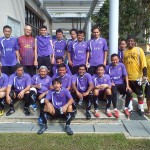 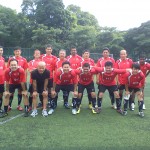 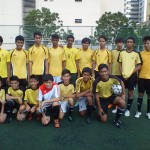 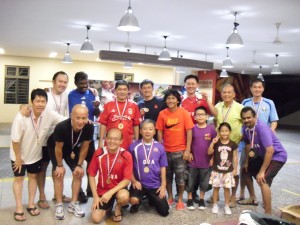 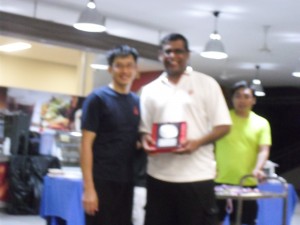 OVA Soccer League 2011 Champions goes to, Tyrwhitt ‘A’ Team, captained by Abang Ho Kwang Hock, an ex-National Team Striker.
Most Valuable Player Award goes to, Abang Krishna Kumar, Tyrwhitt ‘B’ Goal Keeper and also VS ‘B’ boys Goalkeeper in 1977.
Top Scorer Award goes to, Den Mulia, Tyrwhitt ‘A’ striker with a haul of 9 goals.
The medals and award, were given by OVA Immediate Past President, Minister Teo Ser Luck followed by a ‘makan’ session attended by the Players, VS ‘B’ boys Team and their parents, and Elder and Senior Victorians, Mr Han Tsi Fung, Mr Lim Yeow Khee and Abang Lim Eng Chong.