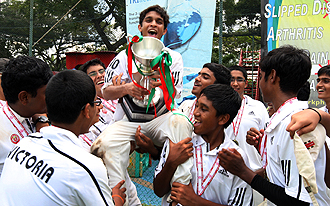 They beat favourites Raffles Institution by 37 runs to claim the title after 41 years. Victoria were second in the past two years.

‘Both teams were good and the match was of high quality,’ said Fred Martens, the Victoria coach. ‘Raffles dropped a couple of crucial catches, we didn’t. That cost them the match.’

Victoria should be thankful Yusuf was dropped when the 16-year-old had just begun his innings.

Yusuf and Sikka, after initial consolidation, tore the Rafflesians’ bowling apart with some powerful hitting.

Sikka smashed 56, including four sixes and three fours, and Yusuf contributed a swift unbeaten 38, with two boundaries and a six, as Victoria totalled 141-4 in 20 overs.

From: The Straits Times