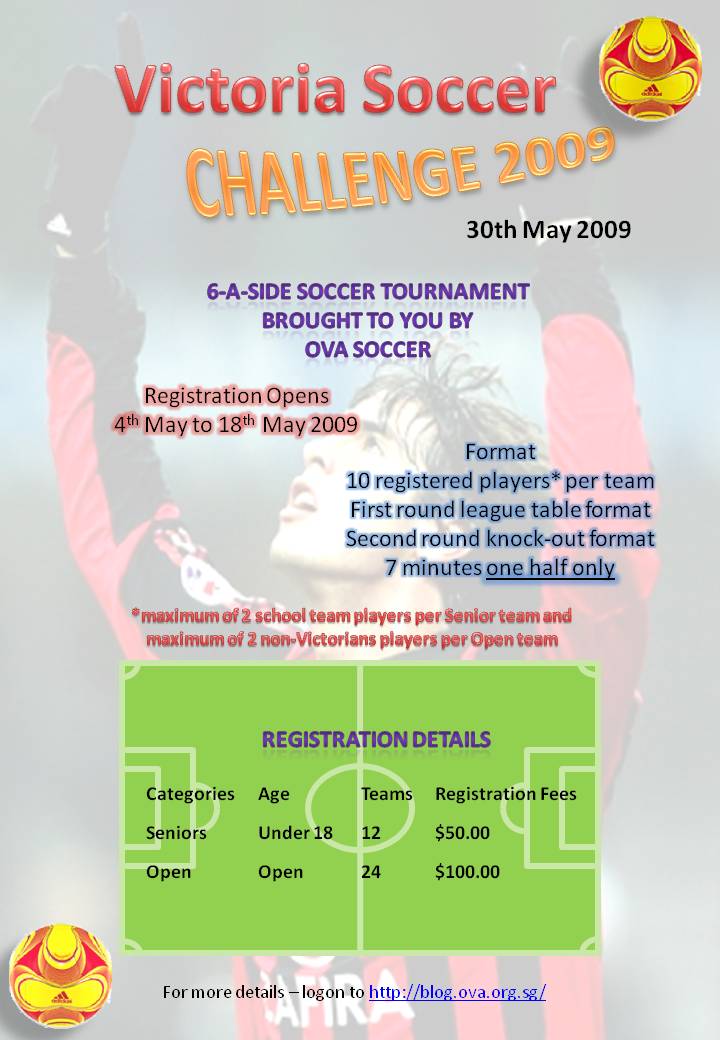 OVA Soccer will be organizing the Victoria Soccer Challenge 2009.

It will be held at Victoria Junior College on

First and foremost, would like to take this opportunity to thank

OVA President, Mr Vernon Teo, for being the Guest of Honour,

Mr Nathaniel from VS

for their kind support and assistance.

Special thanks to Abang Muthu Krishnan, for doing up the VSC 2009 poster, without any “hoo haa”!

To Mr Kho Yang Thong from VJC, who worked tirelessly right up to the day of the event to ensure that everything is up and ready, Many-Many & Much-Much Thanks.

Not forgetting Senior Victorian, Mr John Yap, Chairman of Gombak United Football Club for sponsoring the Mikasa Soccer Balls to be given away as prizes…

It was an early day, as it was planned for the first two games to kicked off at 8.30am, to avoid the recent scorching weather but after the drawing of the lots, we only managed to start at about 9.15am.

However, we were bless by the heavens, as just when you feel that the Sun was biting into your skin, it started to rain at about 11am to 11.30am, thus cooling down everybody’s nerves and verves!!!

Thank You!!! You all must have done something right, right?!?

The Open group stages and the Junior event ended at about 12.30pm and after the prize giving ceremony of the Junior Category, which was won by Iggy’s Team, captained by Iggy himself, we all gathered on the track, for the School Anthem, braving the heat again… just like many years ago… before we start our lessons in the afternoon session…

At about 1pm, the Quarter Finals resumed and the teams that were paired in the Semis were

The finals, which was played between Team 89, led by manager, Mohd Iqbal (Kallang Player) and Half Time United, managed by Abdul Latif (Tyrwhitt Player), was an exciting affair, with 4 goals scored, despite it only being a 7 minutes game.

However, Team 89, was not to be deprived, as they sneaked in another goal to make the final score, 3 – 1, as even the Half Time Goalkeeper was foraging his Opponent’s goal area, in search of the equaliser!

We wrapped up the tournament by 2.15pm and upon reflection, IF, there were any success to be derived from this year’s Victoria Soccer Challenge, it MUST be attributed to ALL you fellow Victorians

from the different decades…

from the different centuries…

who took the time… from their routine Saturdays…

the trouble… of getting back into shape…

the pain… after the game…

the nagging… of their wife/girlfriends…

and the laughter… of their kids…

I am also deeply humbled and am really appreciative of the most “Senior Team” of the Tournament, the “Bandz Bazookas” led by Abang Lim Eng Chong, cos despite the fact that most of them, left Victoria School, when I was just in Sec One (and that was like 34 years ago!) but yet they managed to mobilised their “Band” of Brothers within three weeks to form a Team to participate.

There were even two or three supporters, who came just to give them moral and vocal support.

Take it from the other Captains…

To summed it up…

Last, but not least, on behalf of OVA Soccer, I would like to apologised if there’s any shortcomings, in the way Victoria Soccer Challenge 2009, was organised.

To the organisers of VSC, thank you once again for organising the event again. It is definitely an event we look forward to every year. I do have a request though; can the orgainisers kindly look into a one half of 10 mins instead of 7 for each game? I feel 7 mins may be a bit too short for us to work out a good sweat. Thanks!

Sure, will look into it and released the R & R, after the closing date, Bro.
Thanks for the suggestion.
Nil Sine Labore