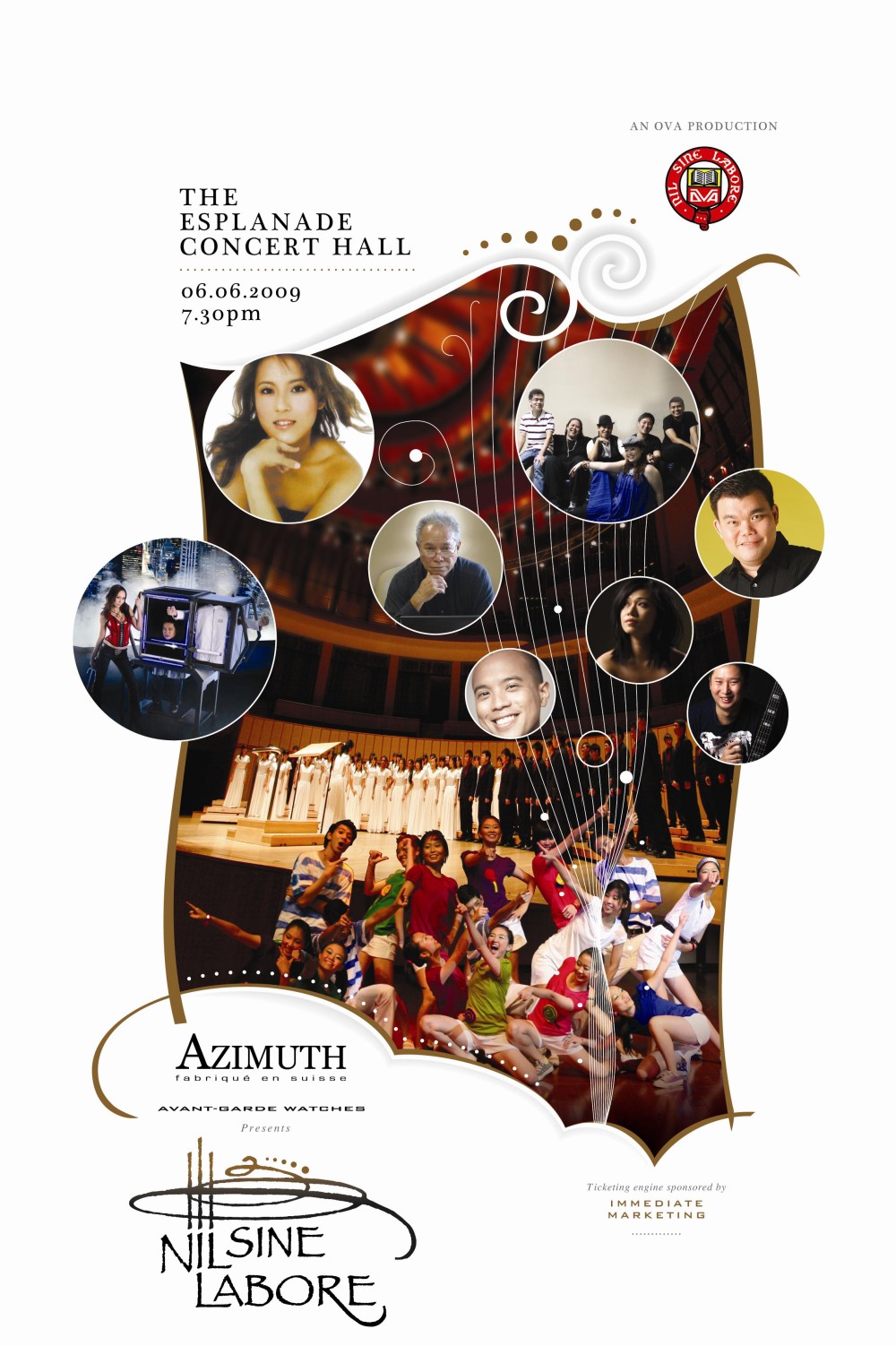 A showcase of the coming of age and the wonderful contributions that Victorians have made to the local Arts and Cultural scene.

With two Cultural Medallions, a host of locally and internationally famous artistes, and award-winning performance groups of VS and VJC, the Nil Sine Labore Concert is something you should not miss!

Get your tickets now!

What a night NIL SINE LABORE turned out to be! The evening started of with a pre-concert reception and avant-garde watches from our sponsor, Azimuth Watch Company were showcased.

Then the night began with VS & VJC Combine Choir belting out their rendition of Magic Songs conducted by Nelson Kwei. Thereafter VJC alumni Shili Yap (VJC S44) and Adi Rakhmadian (VJC S1C) took the stage with a jazzy piece It Don’t mean a Thing if it Ain’t got that Swing.

The Emcees for the night, Joe Augustin (VJC S43) and Joanna Dong (VJC A55), made their first appearance and gave an overview of the entire Concert.

Next up was VJC Piano Ensemble with 8 Hands 2 Pianos playing Rondo pro mládež (Rondo for the Young) in C major (1850) by Bedřich Smetana.

Lynn Yeo from VJC 08S32 came on with a solo touching and emotional piece Victoria. This piece was written and composed by VJC H2 Music students especially for VJC 25th anniversary this year.

VJC Drama next took the stage with a hilarious skit entitled Baby Talk.

Joanna Dong followed with When you wish upon a star and then she did a duet with Brendon Fernandez (VJC A52) with the song Mix Tape. Brendon ended the segment with a solo piece Cheer Up Buddy.

Prof Edwin Thumboo closed the first half of the night with the recital of his poem Victoria School accompanied by VJC Symphonic Band in the background.

After the intermission, VJC beatboxer rev up the tempo with a rap followed by VJC IP Hip Hop Dancers taking the stage. Next up, VJC Dancers gracefully moved in with their award winning piece and show stealer of the night Endless Pursuit. Vernon Teo, OVA President, even remarked that he is going to book them for 2010 YOG!

Another highlight of the evening was a specially arranged piece by Iskandar where he brought together 4 unlikely VJC strings, Er Hu, Gao Hu, Violin and Cello to perform on a single platform!

Joe Augustin joined by his 13 year old daughter was up next with the song Fire and Rain.

He was followed by Jasmine Tye (VJC S21) with a solo rendition of the song Wasted. Chan Poh Meng, principal VJC, then joined Jasmine with a touching Chinese Song, Xuan Ze, made popular by George Lam and Sally Yeh.

VJC Wushu was up next with a trio sparring session before they were thrown off stage by Magician JC Sum (VS S4E & VJC S62). Together with JC Sum was the sexy Magic Babe Ning, performing illusionary acts that baffled audience and even back stage crew!

The final item for the night was local band Raised on Radio, helmed by Marcel Lee Pereira (VJC A52) and Carol Loo (VJC S46). They sang an original composition Running in Circles, before 2 all time VJC Mass Dance favourites La Bamba and Do You Love Me. The VJC Students Councillors were on stage doing the Mass Dance moves, bring back memories to those in the audience.

What an amazing night!